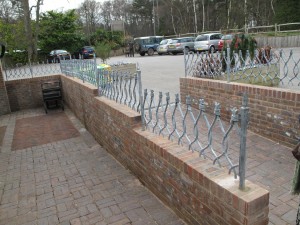 When times are tight, there are few businesses that would dare to expand and support an ancient local craft in the process. But when the Wychcross Garden Centre, one of the principal independent garden centres left in the south east, designed their newly built extension they went looking for something special to decorate it with.  As one of the country’s leading rose specialists they were spoilt for floral choice, but decided that there’s nothing quite as evergreen as ironwork. By collaborating with artist blacksmithing students at Plumpton College and a local firm of artist blacksmiths, they have recently unveiled a set of decorative railings unlike any other.  The newly installed plant themed railings have been wowing customers ever since.

John Hacker, Director of the Wychcross Garden Centre in Forest Row, East Sussex said. “When we set about building our new extension I wanted something that was unique and not mass produced to decorate the exit. I think it was Gaudi who said that beautiful ironwork was the ‘seasoning of good architecture’, so I contacted the Blacksmithing Department at Plumpton Agricultural College to see what they could produce.”

A three month long project by Plumpton students created 4 metres of railings that was directly inspired by the garden centre’s products and its Christian ethos. Led by Plumpton Blacksmithing Tutor Ricky Delaney, a group of 6 students produced an innovative design as part of their BTEC qualification in the ancient art of producing hand crafted metalwork. 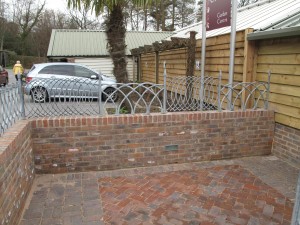 But as winter turned into spring, a further 17 metres of railings were required to match the student’s work before the building could open, so Wychcross turned to the Thirsty Bear Blacksmithing Company in Five Ashes, East Sussex to complete the job. Working around the clock and employing students from Plumpton, the company produced 17 metres of tulip style railings which were installed in early May. The project has been the first large scale commission for the newly formed company which is already employing young blacksmithing graduates from Plumpton.

“Blacksmithing is an ancient art that’s been dependent on the iron ore and coppice woodlands of the Sussex Weald since before the Romans,” said Jake Bowers, director of the Thirsty Bear Blacksmithing Company. “On this new building, the Wychcross Garden Centre has shown how supporting a local craft not only reinvigorates local employment and culture, but creates works of art that benefits all.”

John Hacker says his customers couldn’t more please with the railings. “They really do love them,” he says. “When we first commissioned them it was purely because of the design, but I’ve realised that we’ve also done a great thing for a local craft at the same time.” 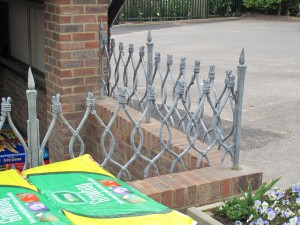 A recently finished firebasket inspired by the work Art Nouveau artists Alphonse Mucha and Hector Guimard has been finished by Artist Blacksmith Jake Bowers. It was recently shown to many of the 10,000 visitors who saw the work of student blacksmiths exhibited at the Plumpton College Open Day on May 11th where it was a central feature. 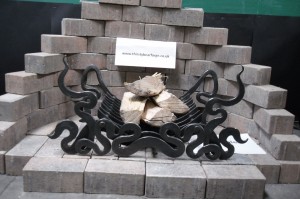 Jake is currently finishing a companion set consisting of a poker, shovel and brush to go with the fire basket. 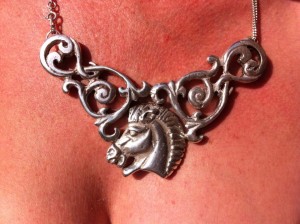 It’s taken a couple of months to carve the jewellers wax because of other commitments but we’ve finally managed to caste and solder together some example pieces for our new jewellery range. This horses head and scroll ends were carved by Jake Bowers and are loosely inspired by the artwork found on Gypsy caravans, carousels and canal barges. This version has been produced in 925 sterling silver.